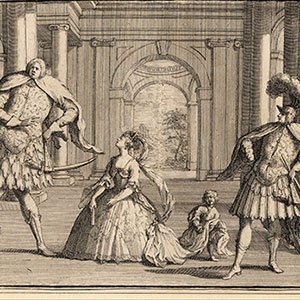 Astronomical fees, hysterical press coverage and fighting fans: sound familiar? We could easily be describing the landscape occupied by today’s footballers, jet setting celebs or temperamental opera stars. For the Italian operatic sensation Francesca Cuzzoni (1696-1778), the scene was no different.

Handel’s Royal Academy of Music in London appointed Cuzzoni to bring her star power to their performances between 1723 and 1728. Her arrival on the London scene was hotly anticipated by the press, with numerous musings as to when the diva would grace the city with her glamorous presence. The role of ‘Teofane’ in Ottone was her first role with the company, but the rehearsals were not without their dramas. Cuzzoni, upon discovering that the first aria ‘Falsa immagine’ was not originally penned for her, refused to sing it. Handel, being the master of his domain, duly threatened to throw her out of a window if she did not comply. Her premiere performance was a triumph, and Handel created a total of nine heroines for the captivating Cuzzoni.

In Ottone, Cuzzoni sang opposite the divo castrato Francesco Bernardi Senesino, the other star attraction in Handel’s company. They shared the stage in subsequent successes, including Flavio (1723), Giulio Cesare (1724) and Rodelinda (1725). They both individually developed a large and loyal fan base, which contributed greatly to the success of Handel’s operas in London. The box office pull of both Senesino and Cuzzoni, led Handel to add another Italian star to the mix, the diva Faustina Bordoni. Bordoni’s arrival in London also percolated press coverage, and in true diva fashion, she arrived late for her contract to appear in Alessandro alongside Cuzzoni and Senesino. Handel, needing to fill the gap in the season created by Bordoni’s absence, composed Scipione in three short weeks, with Cuzzoni and Senesino performing the premiere ten days after its completion, on 12 March 1726.

The addition of Bordoni to the dream team was well worth the wait for Handel, as she quickly amassed her own eager hoard of loyal fans. The theatrics of having two equal leading ladies, Cuzzoni as Lisaura and Bordoni as Rossane, vying for the attention of Senesino’s Alessandro, perfectly fanned the fire of their respective fans’ admiration. The conflict culminated during a performance run of Bononcini’s Astianatte in June 1727, featuring the two divas, which famously closed as a result of a frenzy of fighting fans in the audience. The scandalous rivalry between the two women was pushed by the press, although the conflicts were likely a result of clashing supporters, as opposed to a true hostility between the divas themselves. As there is no such thing as ‘bad publicity’, could the press coverage generated by Cuzzoni and her stage colleagues have been a clever marketing scheme? Created or accidental, this sort of leverage could easily be the envy of any of our modern day press hungry celebrities and PR gurus.

Cuzzoni, Bordini and Senesino put bums on seats, creating a sense of drama and excitement both on and off the stage. They were phenomenal singers, and Cuzzoni was known for her vast vocal abilities, as displayed by the wonderful music Handel created for her. Dazzling coloratura and stratospheric melodic leaps contrast beautifully with languid legato lines: all contributing to the depth of the heroines she portrayed. Cuzzoni, ever the demanding diva, commanded astronomical fees, as did Bordoni and Senesino. The financial strain of employing such stars eventually contributed to the collapse of the Royal Academy of Music during the 1728-29 season, at which time Cuzzoni left London for engagements in Europe.

Sopranos and their rivalry, performance fees that cripple the impresario, refusing productions conceived for another singer: issues just as prevalent in some of today’s top opera houses as in Handel’s time. One thing always prevails: in the land of the divas and divos, there will always be drama, and Cuzzoni was no exception. Join us as we capture her persona in a programme featuring arias from Ottone, Flavio, Guilio Cesare, Rodelinda, Alessandro and Scipione.

For more information about Carl, please visit his website  www.cpgionet.com