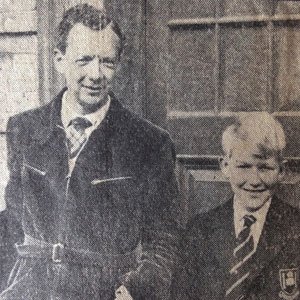 On 22 Nov of 2013, I was thinking about Benjamin Britten, as we all were. My father, Seán Haldane performed as a boy soprano in his early years, and his connection with Benjamin Britten led me to look through Dad’s old music scrapbook on the day of Britten’s centenary. Dad worked with him, even staying at his house with other singers in Aldeburgh, as he performed in the 10th Aldeburgh Festival in 1957. He was also fortunate enough to be one of the four boys in the first recording of Britten’s A Boy was Born in 1957 for Decca, conducted by Imogen Holst. The scrapbook contained a few letters exchanged between Dad and Ben as well: Ben’s tone is humorous and above all, very kind. I came across this lovely picture of Dad and Ben, featured in the Belfast Telegraph on 3 Oct 1956. I also include another photo, that I took in the summer of 2012 during a day trip to Aldeburgh, in front of the Jubilee Hall, where Dad performed in the festival on 18 June 1957. In the photo are Seán Haldane (left), Canadian cellist Marc Labranche (centre) and my cousin, Acadian pianist Carl Philippe Gionet (right).

I found it very moving to crack open my score of Peter Grimes on  22 of Nov 2013, especially after taking a closer look at the humanity behind Britten’s formal image. I look forward to taking part in celebrating Britten’s life through music, as with every performance his essence carries on.[justified_image_grid preset=9 ids=”637,639″ row_height=160 caption=off mobile_caption=off lightbox=foobox mobile_lightbox=foobox max_rows=1 last_row=normal]

Seán Haldane is a writer, publisher and neuropsychologist. For more information about Seán, please visit his websites:

Songs for soprano and guitar